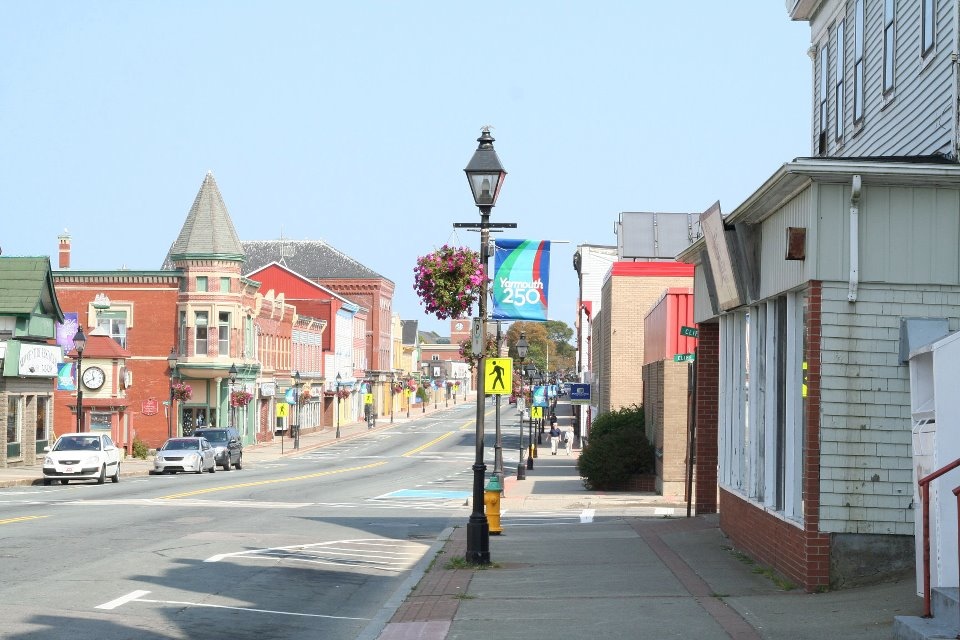 Yarmouth, NS. Didn't know we were going there.

A Road Trip Without a Map

As I write this, Labour Day weekend is winding down. The last long weekend of summer goes well with thinking about road trips. And I’m about to set off on one, metaphorically speaking – perhaps the riskiest and most rewarding kind, a road trip with no map. I don’t know where we’re going to end up or how we’re going to get there.

This metaphorical road trip is TRU Faculty of Law’s brand new course, Lawyering in the 21st Century. I am attempting to choreograph a course that is not exactly like anything that has been done in a Canadian law school before, although it is inspired by some innovative courses created by others – for example, Mitch Kowalski’s Law 2025. One distinctive aspect of this course is that I am encouraging students to think hard about the connection between the challenges that the established business model for law firms is facing and the access to justice crisis. How can it be that there are too many lawyers and not enough lawyers, both at once? Another unique design feature (at least, I think it is) is that the class is set up as a fictional law firm, in which all the students are partners. L21C is something we will create together.

So, fortunately for me, I am not alone on this unpredictable trip. I have collaborators and partners: the students, of course, and also the wonderful, brilliant people who have generously (and very enthusiastically!) agreed to share some of their valuable time and brainpower as guest speakers. This trip will probably be a bit chaotic, and it’s bound to have some unexpected twists and turns, but one thing I’m sure will happen is that we will learn a lot from one another.

It’s been quite challenging thinking up what to write about for this inaugural blog post. It is not really adequate, or interesting, to say I don’t know what’s going to happen next, even if it is honest!

I have found my thoughts keep returning to my experience as a new lawyer, many years ago, which started me thinking about the same questions I am still grappling with today in this course. So I decided to write about that, and here it is.

In 2004, I started as an associate at a big international law firm based in New York. I should say right from the start that in that job I had the privilege of working with some of the most brilliant and creative people I’ve ever known, and I learned a tremendous amount from them and from the experience, which is like nothing else on earth. But there were some things about it that were really bad, especially at the beginning.

When I started at the firm, many associates in their first couple of years of practice were being assigned to mind-bogglingly enormous projects of responding to SEC enforcement requests (the SEC is the US Securities and Exchange Commission, the agency that regulates and polices the capital markets). This involved reviewing e-mails – clients’ internal emails that the SEC had demanded to look at, for potential evidence of self-dealing or messing with the rules – before handing them over. We needed to check whether they were protected by solicitor-client privilege. We needed to check whether there was anything significant or problematic in them that we needed to know more about as the client’s lawyers, or that might affect the client’s strategy in dealing with the Commission. The e-mails were in the millions. A lawyer had to look at Every. Single. One.

What this translated to in real life was rooms full of sad junior associates in conference rooms staring at computer terminals while they (and by they I mean we) clicked on e-mails and organized them in different folders. Meanwhile, slightly more senior and equally sad associates managed the many moving parts of these massive, unwieldy operations.

What made us all unhappy about this was not just the long hours and pressure to work fast, but how mindless it was. A moderately intelligent high-school student could easily have done it. It is dispiriting, after many years of sophisticated higher education, to do nothing but work that doesn’t require that education. It’s also an extraordinary waste of talent and potential.

The mindlessness of the work was connected to another problem. The firm was charging clients for this at work the hourly rate of a first- or second-year associate, multiplied by a conference room full of associates, multiplied by months and months of very long days. That arrangement was highly profitable for the firm (since essentially the only cost to the firm was the fixed cost of our salaries). From the clients’ point of view, though, I think it would not be unfair to describe it as a rip-off. They were paying the rates of people with years of top-tier professional education for a job that a diligent teenager could have done. The clients were highly sophisticated international businesses. I think at least some of them must have noticed.

At the time, I thought this was an unsustainable business practice that was bound to change before long. And indeed it did. Within a couple of years, big document production projects like that were being done mainly by contract attorneys, rather than the firm’s own expensive permanent associates. That cut the cost to the clients and mitigated the problem of junior associates leaving in droves because they were miserable and weren’t getting any real professional experience.

But that was only an incremental change. The fundamentals of the business model were the same, with some tweaking of the dollar amounts. The firm hires a lawyer who costs X, puts that lawyer to work on a highly labour-intensive process, and charges the lawyer’s time to the client at an hourly rate of X plus a lot. The profits (X plus a lot, minus X, times loads and loads of hours) go to the partners.

Do you notice anything strange about this? What other businesses determine the price they charge for something by taking what it costs them to make the product and adding a markup? What happens to a business like that if a competitor offers the same thing at a cheaper price? What incentive does the firm have to make this process better, faster and/or cheaper? A computer could probably do what we were doing – very probably now, quite possibly even back then – faster, about as accurately (maybe more accurately), and at a much lower cost. But for a law firm to adopt the technology that could do that would be economically self-destructive.

I love the law and I love the legal profession. When I talk about things that aren’t working well in the legal industry I don’t mean to denigrate the smart, honourable and often very idealistic people who are part of it. This post is not a set-up for a lawyer joke. Also, it’s important to remember that all human institutions are imperfect, and none of them do everything they’re designed to do really well all the time.

And yet. The legal profession seems to be facing a critical moment in its sense of identity and purpose of which my e-discovery experience a decade ago was merely a symptom.

What really strikes me now about that situation is that it didn’t work for anyone. It was unfair to clients. It was soul-destroying for associates (and then for the contract attorneys). It wasn’t even working for the partners. Yes, they made profits from it, but I think they saw how different this was from the traditional way young associates used to come up and learn the craft of being a lawyer from their seniors, and they were uncomfortable about it.

Above all, the whole situation undermined the ideal of the lawyer as a learned professional providing carefully tailored expert counsel and representation. This reality was a lot more like working in a factory, or being plugged into the Matrix.

To paraphrase Lincoln, you can’t displease all the people all the time. At least, you can’t do that and expect to go on the same way for very long.

Later I learned that I wasn’t the only person to have noticed that something wasn’t working. There is extensive literature on (for want of a better umbrella term) disruptive innovation in the law. There are many brilliant people coming up with new models and using developments in technology to unlock new possibilities.

I have to acknowledge that some of the ideas out there about the future of our profession are a bit discouraging. Richard Susskind, in his brilliant book The End of Lawyers, speculated that one day lawyers could go the way of the old medieval guilds, like tallow chandlers. He could perhaps have added the obsolete legal para-professionals of the past, like scriveners. Maybe years from now future generations might have to ask museum tour guides and historians to explain what lawyers were.

But nobody knows the future. Lawyers might be in for a better future than the tallow chandlers and the scriveners. In fact, we may be on the verge of a very exciting time, when creative new ideas and new technologies could solve some of the problems that for years have undermined our profession’s effectiveness in living up to our ideals of public service, justice and equality.

We are probably looking at a future that’s a complex mixture of both – endings and losses entangled with opportunities and rich rewards.

Setting off into this unpredictable future is – like a road trip without a map – scary, but also exciting. What I hope this course will achieve is to equip the students, my partners, with some kind of road map for their futures. They may be maps with some empty bits marked with nothing but “here be dragons.” But it’s a start. And while I hope to create an environment that enables my student-partners to chart their course, the maps will be their own work, created by themselves, because no one else can do that.

On Labour Day weekend a few years ago, when I lived in Nova Scotia, I set off with a friend and a posse of dogs on an afternoon day trip to the beach – and then, spontaneously, that turned into an unplanned weekend-long road trip around the province. We had no idea what we were going or how we would get there. We did have GPS, though!  I suppose these days there’s no longer any such thing as a literal road trip without a map!

That was one of the best trips of my life. I hope this one turns out to be just as good.