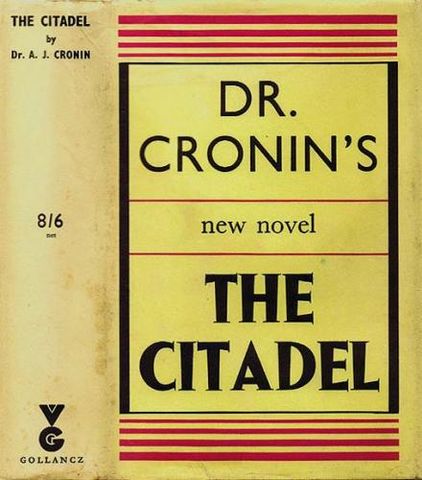 In my non-work time, I’ve been re-reading a novel that I first read many years ago: The Citadel by A.J. Cronin. The Citadel was published in 1937. It was made into a film in the 1930s, and adapted for television several times, most recently in the 1980s.  The Citadel was once a very famous book, but it seems to have faded out of consciousness these days.  I hadn’t thought about it for ages, then I saw it mentioned somewhere by chance and thought “I’d like to read that again.”

I’m glad I did.  It’s a good read.  But more importantly – and the reason for doing a blog post about this book – it turns out that this is a fascinating to read from my point of view now, as a someone who’s part of a profession undergoing great change and examination of its own purpose, ethics, and place in society.

A.J. Cronin was a doctor.  His novel is about a doctor, his fictional alter ego Dr. Andrew Manson.  At the beginning of the novel, Dr. Manson, an idealistic and principled young medical school graduate, arrives in a remote Welsh mining town for his first job.

Andrew Manson works to heal the struggling, proud coal miners and their families.  He gets challenging diagnostic cases and he is brilliant at solving them.  He encounters public health problems – typhoid from a leaking sewer, lung disease from anthracite dust – and he works hard to understand the root causes and solve them, even to the point of taking radical action.  In a memorable scene, he and a friend clandestinely blow up a leaking sewer to force the authorities to fix it.  He is hampered by bureaucratic indifference, and by the ignorance and outdated approaches of some of his fellow doctors.  He doesn’t make much money.  He’s also a bit of a hothead and a prig.  Cronin was too good a writer to make his protagonist an insufferable saint.

Later in the novel, Andrew is seduced by opportunities to make more money and live like his more prosperous doctor friends, who find rich patients and charge them silly money for largely useless treatments.  He becomes, in conventional terms, successful. Cronin portrays this change as a loss of his soul.  And what happens next … you’ll have to read it to find out.

There were many points in the novel that had a new kind of resonance for me, reading it again after years in the legal profession and teaching law.

The Citadel was written before there was a National Health Service in the UK.  All doctors were, essentially, small businessmen (they were indeed mostly men).  Every decision about taking a patient necessarily involved a calculation about profit and financial viability, and could not be based solely on the patient’s need or the complexity of the case.

One thing that is fascinating to me about The Citadel, a twentieth-century book, is that these dilemmas are so similar to the ones faced by medical characters in nineteenth-century literature. There are great fictional doctors of previous generations caught in the same conflict between idealism and material success, like George Eliot’s Dr. Lydgate (one of my favourite fictional characters of all time).  I don’t think the central dilemmas for doctors, or their fictional representations, are typically like that now.  But … they still kind of are for lawyers.

The National Health Service was created after the Second World War, in 1948.  The Citadel’s powerful indictment of the ethics of profit-driven medicine is thought to have helped lay the foundation for the creation of the NHS.

This is a fascinating tale for lawyers going through self-examination about their role as professionals, and reflecting on the systemic strengths and weaknesses of our profession.  I recommend it to any L21C partners who have a bit of time for novel-reading after exams are over.  The gender and racial attitudes are … no better than you’d expect from a book published in the 1930s.  But if you can overlook a handful of cringe-making moments of that sort, it’s a book full of humanity and insight, especially for twenty-first century professionals in the process of shaping their professional identities.  It has a lot to say to us.